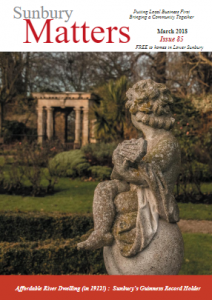 February 2018 was the 20th anniversary of the Ashford Breast Cancer Support Group and we were recently featured in the March edition of ‘Sunbury Matters’, a free publication for residents in Lower Sunbury.

“We attended the 20th anniversary of ABC Support Group.  It was a humbling and emotional event.  These brave ladies had either been through or were still going through breast cancer treatment.  I felt incredibly lucky.  It was a reminder that cancer can hit anyone at any time.  When it does, you need the support and experience of those who have been there before you, who can tell you what to expect and to give you hope.”

Since its inception, many hundreds of ladies and their families have benefited from the support on offer, ranging from practical initiatives to educational talks to outings or a bit of fun.

The group is self-funding and is run by volunteers.  At the celebration evening, they were raising money through a raffle.  All the prizes had been donated by local businesses and the money raised goes back into the kitty.

If you know anyone who has been diagnosed with breast cancer, or who is going through treatment, do make sure that they know that there is a listening ear (or many) and words of advice available.  The message is ‘We are here.  We can help’.

This is the longest existing such group in Surrey.  Mayor of Spelthorne, Vivienne Leighton was in awe of the caring togetherness of the group and wished them well.  She said ‘Twenty years ago when you set up, cancer itself was not so high profile.  What you do is truly fantastic’.

You can find out more about which cookies we are using or switch them off in settings.

This website uses cookies so that we can provide you with the best user experience possible. Cookie information is stored in your browser and performs functions such as recognising you when you return to our website and helping our team to understand which sections of the website you find most interesting and useful.

Strictly Necessary Cookie should be enabled at all times so that we can save your preferences for cookie settings.

If you disable this cookie, we will not be able to save your preferences. This means that every time you visit this website you will need to enable or disable cookies again.